An improvement of a calibration sample commonly used in the Wedge Method.

Atomic force microscopes (AFM) are useful apparatus for measuring interaction forces between an AFM tip and samples at nanoscale. These forces can be classified into a normal force and a lateral (friction) force based on the deformation of AFM cantilever.
However, quantitative AFM friction measurements remain a challenge due to the difficulties associated with accurately calibrating the cantilever for lateral force measurement. One of the most widely accepted lateral force calibration methods is the Wedge Method, a user-friendly single-step calibration.
The raw laser deflection signal is linked to the lateral force through a calibration constant. The latter is obtained with a mathematical model, which accuracy is critical. Systematic errors are typically problematic when measuring lateral forces using the AFM.
Thus, one of the market challenges is to optimize and decrease systematic errors linked to the Wedge Method.

The invention consists in an improvement of a calibration sample commonly used in the Wedge Method.
Thanks to a highly controlled manfuacturing of a calibration low roughness sample, an optimised LFM signal is obtained with a low signal to noise ratio.
The signal is then processed into an adapted data processing software in order to decrease uncertainties of the calibration factor.

A functionnal sample has been designed and produced, and a specific data analysis software has been developed. 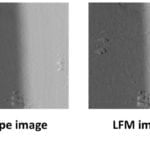 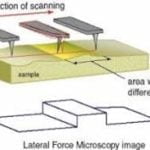