A tourniquet, pre-positioned around a limb (on the clothes), that can be triggered directly by the victim, using only one-hand

Historically, major blood loss resulting from severe wounds has been shown to be the major leading cause of death on the battlefield and directly correlates to major trauma in the civilian sector.Thus, the use of tourniquets to manage life-threatening hemorrhaging in extremities has been essential, because of the immediate lifesaving intervention capability and the speed with which they can be applied.However, they have certain limitations of use: known tourniquet devices tend to be structurally complicated, making it difficult for the victim to single-handle and address his own hemorrhaging condition. As for the inflatable tourniquets, they are sensitive to altitude variations.

The solution is a tourniquet, pre-positioned around a limb (on the clothes), that can be triggered directly by the victim, using only one-hand. It is composed of:
• A support, pre-positioned on the clothes, surrounding a limb
• An elastic sleeve held in a stretched position around the support (which prevents it from retracting)

When the system is triggered (by simply pulling a gripping element from the support, which can be done manually by the victim, using only one-hand), the elastic sleeve is displaced (out of the support), causing it to retract around the limb, compress it and block blood flow.A pin prevents an accidental setting off of the tourniquet.

A functional prototype has been developed. 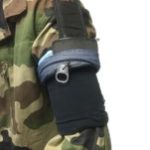 Innovative algorithms and applications for the compression of images, videos, sounds